This site houses my more recently published writing. For more expansive content please visit my website, linked below, and thanks for visiting.

It used to be that the harvesting of wild ginseng was an honorable occupation. Or at least that was the verdict among the people who lived for centuries off the land in the rough-cut Appalachian Mountains of Virginia, West Virginia, North Carolina and Tennessee. Right here, just outside our windows, our commonly-held natural resources are being carefully plundered by people with no more regard for natural cohesion or historical perspective than for anything else aside from immediate profit.
Blue Ridge Outdoors Link to Story

This beautifully illustrated volume constitutes a short overview of mainly Northern and Central European "barbarian" cultures, identified by their initially preliterate civilizations and their cultural distance from the Classical civilizations of Greece and Rome. This book was written for the general reader with a deep interest in ancient European history and is accessible for college and even higher-level high-school students while remaining pleasurable for postgrads.
Ancient History Encyclopedia Link to Story

One of the most adaptable animals in North America, the coyote plays a necessary role in Virginia and is here to stay.
Virginia Wildlife Link to Story

Staring Into the Sun: Science Journalism, Objectivity and the African Poaching Crisis

As recorders of our time, journalists must always be scrupulously accurate in our reporting, in confirming our sources and data, and in delivering our understanding of the world in as compellingly truthful a means as possible. Science and environmental journalists have accepted the burden of telling the story of our fading natural world as a necessary duty to both our profession and our planet.
The Revelator Link to Story

Wyoming Is Waging a War on Wolves

Ever wanted to kill a wolf? If so, now’s your time. In Wyoming, wolf hunting is now legit—365 days a year across 85 percent of the state, where wolves are classified as shoot-on-sight vermin. Guns, snares, explosives, trucks, and snowmobiles—almost any form of violence is allowed to kill these animals.
Sierra Link to Story

Last year, four contestants split the US$900,000 grand prize for the inaugural Wildlife Crime Tech Challenge, an international contest sponsored by USAID, the National Geographic Society, the Smithsonian Institution and TRAFFIC. One prizewinner stood out for many observers, not so much for its technological inventiveness as for its broad application of the American legal system.
Ensia Link to Story

The Allegheny Mountain Institute is finding innovative ways to replant a local agricultural economy in rural Appalachia. In the 1970s Laurie Berman and her husband bought a farm in Virginia as “homesteaders,” eager to reconnect to the land. When she first traveled through West Virginia en route to the farm, she was amazed and then disturbed by the almost total lack of nutritious, locally sourced food along the way.
FuturePerfect Link to Story

The Dismal Swamp: One Road out of Slavery Took You Straight into the Boggiest Place You’ve Ever Been

I keep thinking of what it must have taken to escape, and to a place like this no less. Who would have had the courage? A slave on the run—let’s call him Elijah—might have heard barking and other sounds of hounds chasing him. Running low and hunched over, Elijah would have made his way through fields of wheat, their tawny stalks swaying in the slight nighttime breeze. The heat of the Tidewater region could be stifling, but the chance to run didn’t come every day. Maybe his master had left the plantation to join the Continental Army, leaving fewer men to supervise. Elijah would have grown up hearing whispered rumors of a nearby refuge for escapees in the sprawling swamp that lay near his master’s fields. Men like Elijah, hundreds of them, had worked to dig canals into the peaty soil to drain the wetlands and expand the workable farmland. More than a few slaves probably thought about seeking their own liberty. But it must have taken a certain kind of courage to leave, and to seek freedom in the Great Dismal Swamp.
Humanities Magazine Link to Story

My 2017 stories for the Chesapeake Bay Journal

This page gathers my stories for the Bay Journal, for which I'm a part-time writer about environmental issues affecting the mountains and valleys of Virginia and their impact on the Chesapeake Bay.
Bay Journal Link to Story

Ivory-Sniffing Dogs Are Running Down Poachers Across Africa

Over the past few years the African poaching crisis has devolved into an overt war on the continent's iconic wildlife. Everything from rhinos to lions to giraffes are routinely slaughtered or enslaved for sale to criminal wildlife traffickers, a continental ecological meltdown worth an estimated $23 billion annually.
Motherboard Link to Story

Russian Honeybees to the Rescue

America’s honeybees are in serious trouble. Modern large-scale pollination procedures are hard on the honeybee. Our honeybees (Apis mellifera. ) aren’t native to the Western Hemisphere either, originally being derived from southern Europe and brought over by the early colonists, and there is even some concern from conservationists about their varying impacts on our some 4,000 native bee species.
GRIT Link to Story
View More Stories

I was born in Kansas, grew up in Kentucky, went to graduate school in New England, and now live in Virginia's Shenandoah Valley where I work as a freelance writer of articles and essays dealing with the natural world, history, culture, law and politics. As an attorney I've worked extensively with state and federal governments as well as with various nonprofit groups on environmental issues dealing with land preservation, endangered species, clean air and water, and wetlands mitigation.

Documentary filmmaking is another passion of mine. I enjoyed a month with Maine Media Workshops in the summer of 2011 where I wrote, produced, shot, edited and scored a short film concerning the reintroduction of declining seabirds to the Gulf of Maine, an opportunity funded in part through a Madson Fellowship awarded by the Outdoor Writers Association of America. Currently I'm directing a crew of a dozen volunteers in making a film to benefit a local dog rescue group.

I've even picked up a few awards and recognitions this year:

2017 Speaker’s Fellowship for the World Conference of Science Journalism, Council for the Advancement of Science Writing 2017 Journalism Fellow, Society of Wetland Scientists
2017 Freelance Fellowship for Workshop: “Searching for Truth in the Age of Alternative Facts,” Society of
Environmental Journalists
2017 Certificate of Excellence in Craft for Conservation Writing, Virginia Outdoor Writers

I try to spend a maximum amount of my time outdoors - hiking, canoeing, birding, camping, fishing - though in point of fact most of my days are spent in the salt mines of freelancing: pitching, researching and writing. I enjoy literature, film, history, music, photography and dogs. Especially rescued pitbulls. 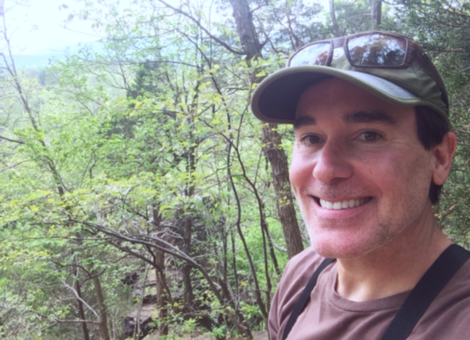